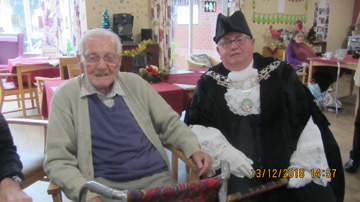 It is with great sadness that we report the passing of BSC Life Member Ron Rayner. Ron was a member of the club for more than half a century and for many of those years he lived in Fieldgate Dock, meaning he was also one of our closest neighbours.

Although not an active sailor himself, Ron was a supporter of the sailing exploits of his stepson Stan Shepherd, who raced Mirrors and Hornets from BSC, and a very active and popular social member of the club.

During the war he was in the RAF and based in Malta, after which he went into teaching, eventually becoming a secondary school headmaster in Colchester. He was actively involved in the Brightlingsea community and took on numerous volunteer roles in the town including being Deputy of Cinque Port Liberty of Brightlingsea (our photo shows Ron with current Deputy Peter Ball), Master of both the Harwich and Brightlingsea Masonic Lodges, a member of the Brightlingsea Luncheon Club and a member of the Royal Naval Association.

Ron often told the story of how he'd had a row with his mother when he was 11, when he apparently told her he would live to be 100 years old and that's exactly what he did, celebrating his 100th birthday in June. He had lived independently right up until the last couple of years of his life, when he moved to the Colonia Court Care Home in Colchester.

Our thoughts and prayers go out to Ron's family at this most difficult of times. The funeral will take place at 2pm on Tuesday 10 September at St James's Church, Brightlingsea and will be followed by a wake at Brightlingsea Sailing Club.